“One of the pleasant things those of us who write or paint do is to have the daily miracle. It does come.” ~ Gertrude Stein

I’m having a hard time getting this post started. First I wrote a sentence about buying Natalie Goldberg’s The True Secret of Writing but stopped half-way through. Then I began a sentence about the book’s title, finished it, and realized it had nothing to do with my topic. I’m still trying to get it right.

For most of us, the first sentence isn’t easy. Neither is the second. Often, the third is troublesome. Sometimes the process just goes on and on.

Okay, scratch that. There’s nothing new in it. I was trying to avoid using the first opening sentence I thought of, because it might be a little off-putting, and I didn’t want you to stop reading. But it’s only fair to warn you:

The section in italics is boring.

It’s not necessary to read the whole thing, but at least skim a few paragraphs, because if you don’t, you’ll miss the point I intend to make.

Below is a draft I wrote for another group blog, Writing Wranglers and Warriors:

I’d planned to write about Shakespeare today, but a picture of a dress fellow Writing Wrangler Nancy Jardine shared stopped me in my tracks.

Copyright restrictions don’t allow me to display a photo here, and I could never describe it adequately, so I’ll post the link to Blonde and Wise and to a picture of the Bright Red and Yellow Trench Dress so you can see for yourself.

I confess I had to look up trench dress. I’d never heard the term. Imagine my surprise when I realized I’ve had trench dresses of my own. Although I love nice clothes, the technicalities have never interested me.

The feature of this particular dress that caught my eye was the plaid. It reminds me of my childhood. There was never a plaid my mother didn’t love and wouldn’t wrap me up in.

And that brought to mind the annual back-to-school treks to Comal Cottons in New Braunfels, Texas, where we bought patterns, fabric, and all the necessary notions to make back-to-school clothes. Friends from up the street and their mother came, too.

We made the trip in July, and started early, to get a jump on the summer heat. The outlet store, about thirty miles from where we lived, was filled with bolt after bolt of cloth. Mother walked slowly, running her hand across every bolt–it seemed to me she touched every bolt–and saying, “Isn’t that pretty,” or, “That color would look good on you,” or, “That would make a cute…” I followed along. My job was to chime about the colors and patterns I liked, but I trusted my mother to do the right thing, and I was bored stiff. I agreed with everything.

Next step, patterns: Opening long metal file drawers, pulling out packets of patterns… Simplicity and Butterick patterns were the best; but McCall’s instructions were confusing. Then, mentally matching styles with material we’d seen, taking patterns to fabrics to make sure, checking yardage and price, reconsidering… I was sure we re-examined every bolt.

By this time my feet were killing me. (I was born with feet designed for sitting). Comal Cottons had no chairs. Three bored tweens, one with aching feet, needed chairs. With chairs, girls can read books. Without chairs, girls stand around, one of them shuffling from foot to foot.

And finally we headed for the car, bearing loads of raw material that over the next six weeks would be made into our fall wardrobes. Which in my case would include a plethora plaids. My mother loved plaids.

By the time I reached high school, plaids had retreated from entire outfits to wool skirts worn with solid color sweaters, and trips to Comal Cottons had ended.

Now, like much else of my childhood, the store is a memory. Today it’s found on postcards.

Thank you, Nancy. With just one picture of a plaid dress, you brought back part of my childhood.

On and on and on. To quote my former high school students, BO-ring.

But as I wrote that last line, the daily miracle arrived: A treasured memory of a different piece of fabric surfaced. And then, another miracle:  I realized the story about the shopping trip was just a warm-up, an introduction, brain rubble that had to be expelled before higher quality thought could emerge.

Acting on the epiphany, I found my bit of fabric, snapped a photograph, and added three short paragraphs to what was already there. Finally, I deleted the boring prelude.

Fellow Writer and Wrangler Nancy Jardine recently shared a picture of a beautiful plaid dress that reminded me of  some fabric I’ve saved for more than fifty years. After residing all that time in my mother’s cedar chest, it’s wrinkled but intact.

The fall I turned eleven, my father’s father, whom we called Dad, gave Mother some money to buy me a birthday present. She purchased the wool shown in the photo and made me a pleated skirt. When I was sixteen, she remade it into an A-line skirt and a weskit. 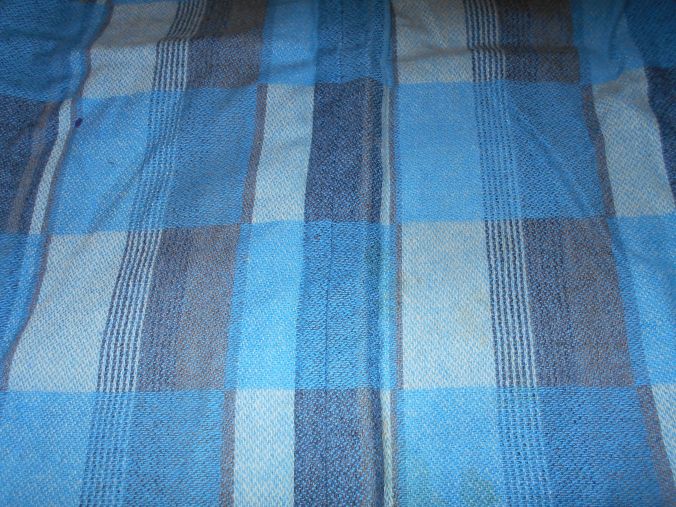 Note: That isn’t the end. There’s one more paragraph. Read it, please, at https://writingwranglersandwarriors.wordpress.com/2015/11/09/a-scrap-of-plaid/ It’s important, too.

But back to the topic at hand.

To prevent further strike-throughs, I’ll get to the point promised in the Warning:

A boring (bad, terrible, appalling, disgusting, abhorrent, loathsome, etc.) first (second, third, etc.) draft is not a Stop Writing sign. It’s a Keep Writing sign, signaling that brain rubble is loosening up, that something better is in the offing–that the daily miracle will come. Because the only way to get rid of brain rubble is to write it out.

I wish I had more time to work on this. If I did, the daily miracle would arrive.

And this post might be on an entirely different topic. It would also contain less brain rubble.