A mystery needs a strong premise to succeed in today’s vast sea of manuscripts and newly published books. But what exactly is a premise? And how can you tell if the premise of your book is a good one?

In Save the Cat, Blake Snyder defines the premise as the idea that promises to be an exciting or interesting story. It’s a short answer to the question, “What’s it about?” Its job is to make you want to read the book. Premise in this sense is similar to the back cover copy (blurb or description) of the book.

ood premise for a mystery? A child is murdered and the detective has to catch the killer. Not good enough. It’s a murder mystery, but why read this one?

Three children go into the woods. Two are murdered and the third is found covered with blood. He remembers nothing. Better. I might read it.

But that was 20 years ago. Now there’s been a similar murder in the same woods and the detective is the third child who survived the earlier crime and still has no memory of it. I will definitely sample that book.

A twenty-year-old body is found, that of a young woman. Twenty years earlier, a young man and his girlfriend planned to elope. When she failed to show up, he thought she’d jilted him. The young man is now a detective, and the body is that of his girlfriend.

In the Woods and Faithful Place are excellent examples of one way to build a compelling premise for a mystery: an interesting crime plus a personal connection with the detective. The fundamental conflict of any mystery—murderer versus agent of truth and justice—is amplified by internal conflict.

Moreover, there is a built-in professional conflict for the detective, because he should recuse himself. In ITW, he keeps it a secret that he was the third child. In FP, he defies orders and investigates secretly on his own.

His example, for the Godfather: “The youngest son of a Mafia family takes revenge on the men who shot his father and becomes the new Godfather.” The whole story, in a nutshell.

The two different senses of the term ‘premise’ are both widely used. In Story, Robert McKee discusses both concepts, which he calls, respectively, the inspiring idea and the controlling idea.

The story-in-a-nutshell of a mystery is the solution to the mystery. It is what I have elsewhere called the hidden drama. It’s the truth about the murder that is concealed in the enticing set-up.

A mystery needs a strong premise in both senses. The set-up states the mystery (someone has been murdered—why? By whom?) and the hidden drama, when revealed, must pack some sort of wallop to pay off the promise of a good story.

I cannot give you an example of the latter without spoiling a mystery. So that’s what I’m going to do. If you have not read Rebecca, STOP READING NOW! Read Rebecca and come back. 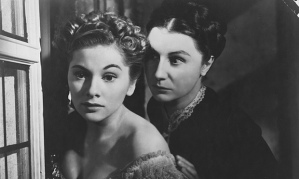 Joan Fontaine and Judith Anderson as the second Mrs. DeWinter and Mrs. Danvers, respectively, in the 1940 film diected by Alfred Hitchcock

A shy, unconfident young woman marries a man whose first wife, Rebecca, has died in an accident. Rebecca was beautiful, talented, seemingly perfect in every way. How can our poor heroine ever compete with the ghost of this paragon?

Not the most powerful set-up (no mention of a crime), but the hidden drama—oh my. It turns out Rebecca was EVIL! Her husband hated her and murdered her! He got away with it—or did he? OMG!!! A witness comes forward! Breathtaking, page-turning suspense ensues. This book delivers on its premise like no other.

On just such a bay in Cornwall, Rebecca De Winter drowned…supposedly.

Call them hook and twist: a compelling crime to be solved and an underlying truth that is both unexpected and confounding. A really good mystery needs both.

A woman who witnessed a murder lied on the stand. Twenty years later, the man who was convicted on her testimony has just been exonerated and released:

Lay Death at Her Door, by Elizabeth Buhmann

3 thoughts on “The Premise of a Mystery”