The term “unreliable narrator” has been circulating widely (and sometimes pretty loosely) since Wayne Booth published The Rhetoric of Fiction, in 1961. The idea is superficially paradoxical: Our only access to a fictional world is through the eyes of the narrator. How can we know better than to believe what the narrator says?

In a way, we can’t. We have to accept the “facts” of a story as given. Generally, the unreliability has to do with interpretations and conclusions. The recipe for the unreliable narrator is to present observable actions and dialogue, then have the narrator interpret them, either in dialogue or in thought.

In The Turn of the Screw, for example, the “facts” of the story, as given to us by the governess-narrator, are that the governess sees the ghost of the dead man Quinn, while the housekeeper and the children say they don’t see him. Is the narrator delusional?

She says not. She asks us to believe that the children are lying and the ghost is deliberately not appearing to the housekeeper. She bases her beliefs on very subtle cues. It is impossible not to question her inference (and her sanity)—but who knows? Maybe she’s right! 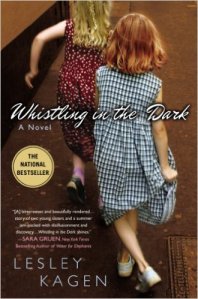 Lesley Kagen’s narrator, ten-year-old Sally, in Whistling in the Dark, is unreliable because she’s young. When she hears that her daddy is a lush, she looks the word up in the dictionary and concludes, endearingly, that he is luxurious—like chocolate cake. A gap opens between Sally’s understanding and ours.

Kagan’s novel has a thrilling premise: this unprotected child has suspicions about adults at a time when a child-killer is on the loose in her town. Her innocence makes her vulnerable, and we are all the more fearful for her because of that.

Narrators are characters, and like anybody else, they may be naïve, biased, forgetful, irrational or downright insane. Any one of these traits can make the narrator the kind of person whose perception you might second-guess.

The narrator of The Girl on the Train is an alcoholic, and that compromises her credibility as a narrator. Sometimes she can’t remember what she’s done. And sometimes she is so overwhelmed by self-loathing that she cannot perceive others clearly. Here again, the narrator’s flawed perception ramps up the sense of danger.

In some of the best mysteries, the narrator (or viewpoint character) is unreliable in yet another sense—the detective is obtuse! If the author “plays fair” in a mystery, the solution is revealed in clues before the detective figures it out. The reader has a chance to solve the mystery.

The detective, though otherwise portrayed as smart and observant, draws false conclusions along the way, spins false theories, suspects one wrong person after another, until that light bulb moment when the mystery is solved. The reader, thus distracted, doesn’t see the solution before the revelation at the end. You could make a case that mystery works best when the narrator is unreliable but the reader doesn’t know it.

I was actually surprised when the main character of my own book was first labeled an unreliable narrator. She lies to other characters, so it’s fair to call her a liar, but she never once lies to the reader in narration.

She does, however, keep a momentous secret hidden throughout the entire book, while parading it in front of the reader’s eyes. The trick for her was to set up the reader’s assumptions, then to remain silent. For me the challenge was to play fair (and I did).

Elizabeth Buhmann is the Author of Lay Death at Her Door. An old mystery comes unsolved when the man who was convicted of it is exonerated.

4 thoughts on “The Unreliable Narrator in Mystery and Suspense”