First off, let me say that Ian McKellan knocks it out of the park. I can’t imagine a better choice to play an aged Holmes. Everything about his performance was stupendous. Things like how he carried himself, to the minute changes he had in his facial expressions, conveyed exactly what Holmes was thinking and feeling

We see Holmes just after WWII. That’s right, WWII! So he’s 93 in this movie. Holmes is struggling with the degeneration of his most prized asset, his mind and memory. The idea was jolting to me. It’s a bit like Superman without his super strength. But, as we know, it can happen to anyone. And it becomes more and more apparent to Holmes that this is happening. So he must confront this impediment while trying to recall the details of his last case.

We also see his humanity. Traditionally Holmes been portrayed as an observer of human behavior. But actually feeling connections with people seem to elude him. Except for his friendship with Dr. Watson, his fascination with Irene Adler, and interactions with Mrs. Hudson, he has no relationships. The facts have always been more important than the human relationships. Certainly they are easier for him to understand. Living his life in such a sterile manner has ultimately left him alone.

So here he is, at the end of his life with no friends or loved ones. And he has to confront and hopefully accept some of the decisions he’s made over the years. Will he use this insight to make new friends? Will he find peace with his decisions? 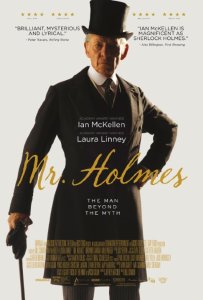 Click on this picture to see the IMDb featurette! Don’t worry, no spoilers!

That’s all about the story that I’ll say. I don’t want to give too much away. If I was a total Sherlockian (is that a thing?) I’m sure I would have caught some inside references. Bees do play a major role in the movie because he’s a beekeeper. This isn’t totally out of the blue. In the story, His Last Bow, Holmes has retired to Sussex and keeps bees. So I wasn’t too surprised to see that.

Also, in a scene in the movie Holmes goes to the theater to watch a movie about himself, a movie based on a story that Watson had written. (How meta is that?) The actor on the screen was Nicholas Rowe, who played Holmes in the movie Young Sherlock Holmes. I wanted to shout out in the theater, “He played young Sherlock Holmes! McKellan is playing Holmes, watching a movie about Holmes, played by Rowe who played young Holmes!” (Yea, I’m not allowed out in public much.) But I was good and didn’t even whisper it to my friend sitting next to me.

So that’s it. It wasn’t an action-packed version like the ones with Robert Downey Jr., but the mysteries that were woven throughout kept me in my seat, wanting more. If you don’t watch it in the theater, please add it to your rental list. You won’t regret it.