I hate it when that happens. I hate it especially now, because when I finish this post, it’s going to sound like a fourth-grade book report.

But, as many of us have learned over the past six months, sometimes we just do what we have to do. So here’s my report. 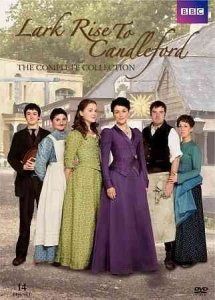 Lark Rise to Candleford, adapted from a trilogy of semi-autobiographical novels by Flora Thompson, is set in the English countryside in the 1800s, and focuses on the lives of residents of the country hamlet of Lark Rise and the nearby town of Candleford. David and I watched it on PBS ten years ago. It’s sweet and sentimental, and we enjoyed it. The critic who called it “ham-fisted” can go jump in the lake.

The episode that caught my attention tonight begins at harvest time, when all the residents of Lark Rise take to the fields to help young farmer Al Arliss bring in the wheat crop. That’s all the residents. Women and children follow the men and gather the “leavings.” What they bring in will determine how much flour they’ll have for the rest of the year. Harvesting usually takes two weeks, but Al is determined to finish in twelve days–perhaps in ten. He pushes the others. By the end of the day, adults are exhausted.

But before it’s time to leave the fields, children are falling ill–with measles.

One Candleford child, postmaster Dorcas’ adopted son, has worked in the fields that day “for fun.” The next morning, when Dorcas realizes he’s sick, she closes the post office and quarantines with him in their house upstairs. She tells her employees to provide as many services as possible from the post office porch.

Teenaged Laura, the eldest of a large Lark Rise family, now a postal clerk in Candleford, assures Dorcas that measles is common in families. Mailman Thomas, who as a teenager lost several siblings to measles and reared the survivors after his parents died, agrees that it’s common but says some families are “very reduced” by it.

A journalist stopping by Lark Rise on his way to Cambridge tells Laura’s father, a stonemason who’s been in the fields with his wife and children, that there are measles in Oxford; he’s been covering the story for his newspaper. It’s newsworthy because for the first time, the city has set up contagion hospitals.

The disease is hitting harder this time, he says, because it’s past due. This isn’t just an outbreak. It’s an epidemic.

By the next day, every child in Lark Rise has measles.

But the wheat must be harvested. Every single person must work in the fields. For the next two weeks.

But children are seriously ill. Mothers can’t leave them.

But if the women don’t work in the fields, there will be no flour for the winter.

Children will die of starvation. So will adults.

The men of Lark Rise agree. It’s a problem. But there’s not a thing to do about it.

The journalist tells them, “Measles will not recognize the walls that separate you as neighbors.”

Do what they’ve done in Oxford: bring the children to one place so they can be cared for together. The Turrill home–Queenie Turrill, the community’s wise woman and healer, has been foster mother to children for over fifty years. Mothers of children with lighter cases go to the fields. Others stay as nurses. Thomas, who has spent years trying to forget the deaths of his loved ones, puts that sorrow aside and helps with  nursing–after all, he’s a committed Christian, and his wife has told him it’s the Christian thing to do.

And the shopkeepers of Candleford, many of whom look down on the poor, unsophisticated farmers of Lark Rise, show up en masse to work beside them and harvest the grain.

I watched that show ten years ago, and the only thing that stuck with me then was  the death of the farmer’s teenaged brother. It was sad. As usual, I cried. That was that.

Tonight I saw something entirely different. Every line of dialogue had new meaning.

And people listening to reason, following the lead of the medical community in a major city, caring about one another, taking care of one another. Working together for the good of everyone. Loving their neighbors as they love themselves.

Sweet, sentimental, ham-fisted, I don’t care. It felt good to see a story about people facing terrible odds and doing the best they could. And doing it right.

Kathy Waller blogs at Telling the Truth, Mainly. Her latest publication is the novella Stabbed, written with Manning Wolfe.