Over the past weeks of being locked down, I’ve read many beautifully written high-minded prose on self-reflection, and assessments of personal, social, and political attitudes in these tumultuous times. My question, however, is simpler. Will we emerge as a new nation of truly liberal thinkers who can share ideas, even ones that are contrary to our mindsets? Truthfully, I don’t know the answer. But having survived disasters, losses, injuries, and illnesses, I refuse to be beaten down now. For me, it’s “one foot in front of the other,” and march on.

So, on the lighter side, how do I pull myself back to center and regain control? I walk on the treadmill (ugh!), clean, and organize what’s gotten out of control during life before COVID (double ugh!). I catch up on DVR programs and read a mountain of books. While all of these are helpful, the number one activity that I find satisfying, refreshing, and restores my sense of control is cooking.

My entire childhood and a good part of my adulthood were spent in Corona, NY (nothing to do with the virus), an immigrant community where Italian cooking, reigned supreme. I remember the lively discussions, sharing of methods, and debates between my grandmother, my mother, and other relatives and friends about the finer points of preparing foods, even something as seemingly simple as making a marinara sauce.

Even my grandfather had opinions about good cooking, and his pet peeve was potatoes.  When not working 18-hour days in the business he built from scratch or tending his little farm, he took a hands-on approach, insisting that spuds be sliced precisely in the correct thickness and shape for each different recipe. Today’s cooks have the mandolin to help with that. The only mandolin he’d ever heard of was the kind that made music!

Then there’s Julia Child. “I don’t get the whole thing with Italian cooking,” she once said. “They put some herbs on things, they put them in the oven, and they take them out again.” To the revered American master of French cooking, Italian cooking was too easy.

Well, Ms. Child, I beg to differ, but first a little culinary history.

The development of French food reaches back to medieval times. During this era, according to the ECPI blog, “French cuisine was fundamentally the same as Moorish Cuisine,” and everything was served at the same time, service en confusion.

In time, presentation became very important, and great value was placed on rich and beautiful displays, utilizing consumable items such as egg yolks saffron, spinach, and sunflower for color. “One of the most elaborate dinners was a peacock or roast swan, which was sewn back into its skin and quills to look intact. The feet and nose were plated with gold to finish the exhibition.”

It was in the 16th century that French cooking received an infusion of new ideas. While the Renaissance flourished in Italy, the powerful Florentine Medici family married off their 15-year-old princess, Catherine, to Henri, Duc d’ Orleans. Off to France, the princess went, taking with her the chefs in her service and their advanced cooking skills. They were already creating dishes such as lasagna, and manicotti, which are still staples of Italian cooking today, as they experimented with truffles and mushrooms.

Even though these two culinary schools’ took distinctive and separate paths, the French owe much of their gastronomic advancements to the Italians, thanks to Catherine de Medici.

Over time, French cooking became revered for its Haute Cuisine, developed to entertain French royalty. Steeped in butter, fats, fancy crusts, and all sorts of disguises, still, one must guess or be told what they are eating, delicious though it is.

We Italians, on the other hand, don’t really like our foods disguised. We like to know what we are eating as soon as it’s on the plate – or at least as soon as we’ve taken the first bite.

Italian cooking has grown from centuries of learning how a few simple ingredients enhance each other. What evolved into today’s Italian cuisine began during the Roman Empire. Of course, then, as now, the wealthy could afford to buy and try the exotic and foreign. Thus, the most affluent Romans had cooks experimenting with foods from the lands they’d conquered: Spices from the Middle East, fish from the Mediterranean, and cereals from the North African plains. The majority of folk, however, relied on the “Mediterranean Triad:  vine, grain, and olive,” and two thousand years later, pure Italian olive oil is still a universal leader, for its purity of taste and clarity.

Most Italian cooking is, on the surface, simple – needing few ingredients, but the knowledge of how to use them is what makes the dishes shine. For example, the American habit of overwhelming pasta with sauce is un-Italian. Properly prepared, Italian sauces are intensely flavorful and should only coat the pasta, not drown it.

Contrary to Ms. Child’s belief, however, there are some very complicated Italian dishes for which one needs patience, time, and the willingness to try, fail, throw it away, and try again.

Homemade lasagna and manicotti, originating during the Renaissance, continue to be a labor of love. The Bolognese Sauce that is misrepresented in America as just a simple meat sauce takes hours to prepare. There are other delicacies such as the Pizza Grana, a traditional Neapolitan Easter pie. Years ago, my grandmother, my mother, and I made these every Easter. It was indeed a labor of love. There is a link below for the industrious who want a challenge. A word of warning, though. Do NOT use any prepared pie crusts. Part of the lusciousness of the recipe is the sweet crust (pasta frolla). If you read the recipe, you’ll understand why it’s limited to an annual preparation.

Then there is my favorite. Homemade pancetta and black pepper bread. I don’t bake it too often because my husband and I eat too much of it.

Vegetables are fundamental to the Italian diet, and here a word on olive oil is essential. Olive oils range from cooking quality to the more expensive finishing quality. They vary in flavor and weight from region to region, and those differences are especially significant for vegetables because heat alters the flavonoids that give the oil its flavor. Thus, I often use a less expensive oil to sauté broccoli, aglio e olio (garlic and olive oil), which can be served as a side dish (contorno), or as part of a first course, (prima piatta). Pour it over Orrechietti pasta, add a little grated cheese, and serve with a mixed salad. You have a meal.

String beans are one of my family’s favorite vegetables. Blanched for no more than one minute to retain vitamins, then cooled, and sprinkled with salt and high quality, cold-pressed, pure Italian Olive Oil, my grandchildren can and do eat green beans prepared this way by the pound.

As you can imagine, the volumes written about all cooking, including Italian cuisine, can fill bookstores. Cooking can be creative and imaginative. Take a basic recipe as I did with the pancetta and black pepper and add or change ingredients and invent something new. So, instead of allowing this upside-down, dangerous world to rob me of my peace and inspiration, I go to the kitchen where I feel free, refreshed, in control, and creative.

But it’s time to end my musings on the benefits of cooking. My grandchildren await me at the kitchen table, staring at the mountain of green beans, asking for, “more olive oil, please?”

As my favorite Italian chef, Lidia Bastianich, says, “tutti in cucina a cucinare.”

Everyone in the kitchen, to cook! 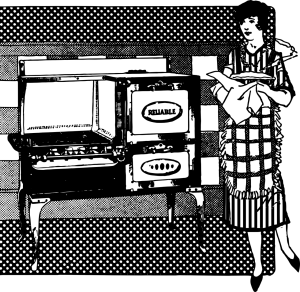 For detailed information on the evolution of French cooking, see the Brief History of French Cuisine: https://www.ecpi.edu/blog/a-brief-history-of-french-cuisine

The history of Italian food: https://www.lifeinitaly.com/food/history-of-food/the-history-of-italian-cuisine-i/

To make this into a pancetta and black pepper bread, before beginning the dough, sautee ½ – 1 lb chopped pancetta (I recommend Primo, Italian style diced) DO NOT COOK THROUGH. Allow it to cool.

Add the cooled pancetta in the first step of making the bread, along with 1-2 TBSPN coarse black pepper.

Be sure to have a cooking thermometer that goes up to 250 degrees. Generally, bread is cooked through at 200 – 210.

FOR A CRASH COURSE ON OLIVE OILS