May 8 was VE Day. 2020 marks the 75th anniversary of Germany’s surrender in Europe. Three-quarters of a century ago, Adolf Hitler and his National Socialist German Workers’ Party (Nationalsozialistische Deutsche Arbeiterpartei, NSDAP, also known as the Nazis hid in their bunkers, committed suicide or melted into the general population and escaped justice.

Thanks to Hitler’s diabolical determination to have Germany rule the world, over 100 countries were dragged into the conflagration, defined by two major groups. Germany, Japan, and Italy, the major powers of the Axis Alliance, and the major powers of the Allied forces, led by Great Britain, the United States, the Union of the Soviet Socialist Republic (USSR), and to a lesser extent, China. The remainder of the world lined up with one side or the other, with some exceptions, most notably Spain, Switzerland, Sweden, and Portugal, and they too had to arm and defend their borders. Some of these impartial countries ended up occupied regardless of the “neutrality,” but no matter which side any nation fought on from 1939-1945, now, 75 years later, the world remembers once again and all are glad for its end.

This year’s tributes are, however, quiet, lonely affairs, as the world battles another monster: COVID-19, which is preventing large public ceremonies from marking the end of a war that cost 40 – 50 million lives worldwide, both military and civilian. Lest we forget when we speak and write of the human cost so long ago as numbers and statistics,  these were people. They were sons, daughters, husbands, wives, and children, which gives us one inescapable truth. War is hell!

Great Britain lost 450,700 souls. They scaled back their big, planned celebrations: no mass gatherings, no hugging, and kissing. Tragically, many of the remaining veterans who fought in that war are living and dying sad and lonely deaths in nursing homes in Great Britain and throughout the world.

France – Despite their initial collapse and surrender to Hitler, both in their home nation and Indochina, gave 567,600 souls to the war.

After 75 years, Germany must live with the fact that it all began with them.  Hidden behind an effort to reestablish the German peoples’ right to live and thrive, was an evil intent that would poison the nation and take upwards of 8,000,000 German lives. 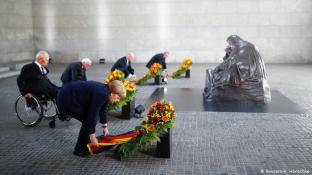 The Union of the Soviet Socialist Republic, then in the hands of Josef Stalin, another up and coming devil in history, lost 24,000,000

In Italy, official tributes began on April 25, Liberation Day, marking the date when Allied forces and Italian partisans drove the German occupation army out of the country. Italian losses stacked up at 457,000, including deaths from the civil war that took place simultaneously with the world conflict. For Italy, the war did not end on April 25 or May 8. Italians suffered through three distinctive battles between 1943-1945: Liberation against the Germans, the fight against fascism, the class war that underpinned both, and the struggle to reorganize a nation. On April 25, Italians came out on their balconies and sang Bella Ciao, the Italian protest song. It rang out across the nation.

Often in wars, fight songs are inspired, such as the Star-Spangled Banner, written in 1814, during the War of 1812, and The Marseilles, in 1792, when France declared war against Austria. Bella Caio, the Italian protest song against oppression, originated with the protests of the Mondina women who worked the northern rice paddy fields in the late 19th century. It reemerged during WW II, and has since been translated into 30 languages and has become an international anthem of resistance.

Tributes to the final battles of WW II are not over on May 8. Although the war with Japan ended on August 14, the official surrender date was September 2, 1945.  At the war’s end, Japan lost upwards of 3,100,000.  September 2, will officially mark the end of WW II, 75 years ago and this commemoration will also be muted by COVID-19, but not ignored.

One thought on “WW II: PAYING TRIBUTE IN THE TIME OF COVID-19 NEVER FORGET”