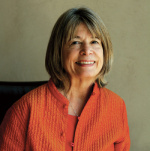 So, did you dress up for Halloween? Did you buy a mask in New Orleans, or Venice, perhaps one with feathers? What would you wear to a costume ball? 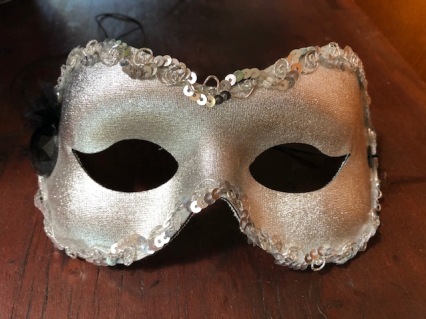 “Man is least himself when he talks in his own person. Give him a mask and he will tell the truth.”  Oscar Wilde

“Man is a make-believe animal—he is never so truly himself as when he is acting a part.” William Hazlitt

Both statements have some truth. Maybe Oscar Wilde meant that when we can hide our faces, or adopt a disguise, we feel free to do what we want––without hesitation or regret.  Yell “trick or treat!” Dance at the masked ball as a glamorous mystery person!  Rob the stagecoach! Maybe writers understand Hazlitt: we’re at our best, writing, as we invent characters, invent parts for the characters, invent disguises. Yes, we’re at our best “acting a part…” and we act many parts as we write.

At my college there was a costume room where students could buy clothes from decades earlier.  One year a group of us rummaged around and found remarkable outfits which we’d don sometimes for fun. For $1.50 I acquired a stunning long black silk evening sheath from maybe 1919, with black sequin trim under the bodice, slits in the sides of the skirt, and two long black “wings” attached to the shoulders that I could use like a shawl, or like… wings. When I put that dress on––SHAZAM! I wasn’t a young thing from Texas, I was the embodiment of glamour. (Where is that dress?) So, what’s the outfit you wear, or dream about, when you’re ready to put on that black cat-eyed mask from (New Orleans) (Venice) and enter the party? The disguise you’d choose? The disguise that would let you do what you want, learn what you want, go where you want? 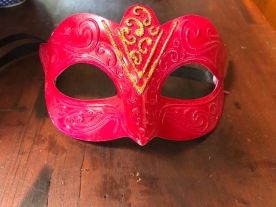 Disguise lets us learn what may otherwise be unavailable. Think of T. H. White’s The Sword in the Stone, where Merlyn (White’s spelling) enchants Wart (the future King Arthur) by turning him into a perch in the moat. Wart learns to swim from a fish called a tench, who reminds him, “Put your back into it.” He’s taken to learn about power from the King of the Moat, a murderously hungry four-foot long fish: “The power of strength decides everything in the end, and only Might is right.” He learns from his night as a merlin, in the terrifying catechism imposed by the peregrine, that the first law of the foot is “Never to let go.”

Harry Potter, Hermione and Ron need information to foil the Dark Lord, and to raid Gringotts Bank and the Ministry of Magic. They resort to the invisibility cloak, or use Polyjuice Potion to look like Bellatrix, or Crabbe and Goyle.

But knowledge won by disguise carries peril. Wart barely survives the unscrupulous King of the Moat, having to dive “the heartiest jack-knife he had ever given.” The moment when Harry Potter’s invisibility cloak slips, when the Polyjuice potion wears off, threatens exposure and punishment.

Kim, in Kipling’s beloved novel, disguises himself to learn secrets as a child spy for the Company’s intelligence service in India. But Kim doesn’t see disguise as work. He revels in the sheer joy of successful impersonation. He rejoices in the walnut dye that lets him escape on a railroad journey to meet his lama, where he tries out various personae, explaining to the passengers “that he was assistant to a juggler who had left him behind sick with fever.” As the occupants of the train car change, “he varied this tale, or adorned it with all the shoots of a budding fancy…” This joyous talent becomes dangerous as he adopts Mohammedan garb, spying for Mahbub Ali, and priestly garb as he chases Russian spies across the Himalayan foothills.

Maybe Kim’s an exemplar of Hazlitt’s statement, that “man is never so truly himself as when he is acting a part.” When fate requires a disguise—or just for fun on the Indian railway––Kim uses all of himself to create that disguise, summoning memory, imagination, accent, intonation, clothing, gesture, posture. As actors do! Perhaps all these disguises are part of him…though not all of him. 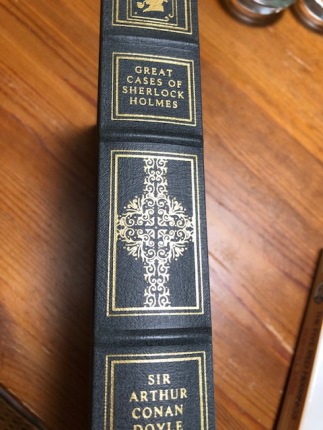 Like Kim, Sherlock Holmes (or Arthur Conan Doyle) loves disguise. Remember “A Scandal in Bohemia?” Disguises everywhere! First, a client sporting a “black vizard mask” seeks help from Sherlock Holmes. The client’s disguised as the Count von Kramm, a Bohemian nobleman, but confesses he’s actually King of Bohemia. He wants Holmes to “repossess” (snitch) a compromising photograph of the King and the famous beauty Irene Adler. 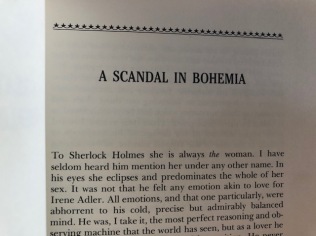 Holmes himself then adopts disguises. First, to spy on Adler, he appears as “a drunken-looking groom, ill-kempt and side-whiskered, with an inflamed face and disreputable clothes,” so convincing that Watson “had to look three times before I was certain that it was indeed he.” Next he plots a disguise to gain entry to Adler’s house, where the photograph is hidden:

“He disappeared into his bedroom and returned in a few minutes in the character of an amiable and simple-minded Nonconformist clergyman. His broad black hat, his baggy trousers, his white tie, his sympathetic smile, and general look of peering and benevolent curiosity were such as Mr. John Hare alone could have equaled.”

Watson notes that it was not merely that Holmes changed his costume: “His expression, his manner, his very soul seemed to vary with every fresh part that he assumed. The stage lost a fine actor, even as science lost an acute reasoner, when he became a specialist in crime.”

But Conan Doyle fools us yet again. Holmes orchestrates a street melée whereby a crowd (of accomplices) carry the clergyman into Adler’s house. When Watson throws a fire rocket through the window, Holmes, as predicted, sees Adler rush toward the photograph’s hiding place. On their way back to Baker Street Holmes happily tells Watson about his ploy, but as he searches for his door key, he hears “Good-night, Mr. Sherlock Holmes,” from “a slim youth in an ulster who had hurried by.”

Foiled again––Holmes, that is. Irene Adler, disguised as a boy, has followed him home and confirmed the “clergyman” was Holmes. The next morning Holmes and Watson discover her house is empty, the photograph’s gone, and his disguises were in vain. That’s “how the best plans of Mr. Sherlock Holmes were beaten by a woman’s wit,” says Watson.

Holmes does love a good disguise, and maybe that’s why he can recognize one. For another example of his Hazlitt-esque behavior, see “The Man with the Twisted Lip,” where Watson almost doesn’t recognize Holmes as an aged opium smoker, and Holmes susses out the (disguised) truth about the disappearance of a client’s highly respectable husband by (literally) washing clean the face of a notorious street beggar. 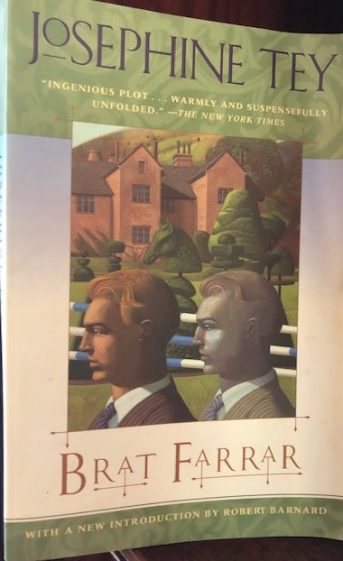 Josephine Tey teases us with disguise in Brat Farrar where the mystery turns on whether Brat Farrar, a young man who introduces himself as the long-lost heir to the Ashby family estate, is or is not Patrick Ashby, thought to have killed himself, leaving his minutes younger twin Simon as putative heir. Simon will be dispossessed if Brat Farrar is for real. The point of view is frequently in in Brat’s head, and we must decide if we like this disguised pretender as a protagonist, or not. He himself is ambivalent, arguing with himself about the whole scheme: On the one hand, he thinks, “But I’m not a crook! I can’t do something that is criminal.” But then: “All he could do was sit in the saddle and hope for the best. But at least it would be a breath-taking ride; a unique, heart-stopping ride. Danger to life and limb he was used to; but far more exciting was this new mental danger, this pitting of wits.” As he feels his way along, still in disguise, Brat slowly learns who did kill Patrick. That knowledge nearly kills Brat Farrar. 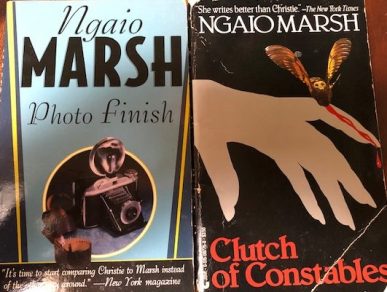 New Zealand’s Ngaio Marsh has the murderer disguise his or her true identity in both Photo Finish and A Clutch of Constables. In the first case, the murderer creates a new identity from whole cloth. He accidentally gives himself away to Detective Rory Alleyn in part when Alleyn overhears his soft-voiced use of a Mafia expression. In A Clutch of Constables, the murderer––a master of disguise––entirely steals another’s identity, including his butterfly-hunting expertise, for the duration of a cruise. He relishes his persona and manipulates the unwitting characters like chess pieces on the board of the plot––more in the Hazlitt manner, being most truly himself as he throws himself into the role.

Mystery writers disguise their murderers, their sleuths, sometimes their victims, sometimes their protagonists.  I use disguise in my new murder mystery Ghost Cat. I’ll be interested in what you think. Happy reading and writing, everyone! 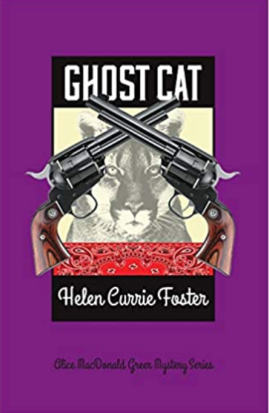