A lawyer, an Army clerk and a border patrol agent walk into a bookstore…

BookPeople, our much beloved independent bookstore here in Austin, hosted a panel of crime writers this past week, and the discussions kept us laughing, interested and entertained the entire evening. Scott Montgomery, BookPeople’s Crime Fiction Coordinator, moderated the panel, although it quickly evolved from a formal Q&A session to a fascinating conversation amongst colleagues and friends.

Martin Limón, Manning Wolfe and Billy Kring gathered together to share how each of them has taken their professional experiences and used them as foundations upon which to build successful crime writing careers. The program was titled “Write What You Know,” and it’s clear that each author has executed this writing tenet with substantial skill. 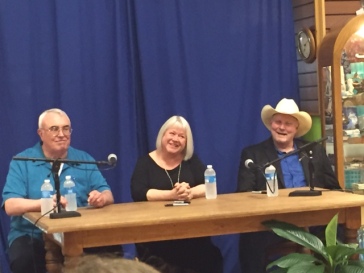 It seems that a solid sense of humor is a requirement in each of these fields, as Billy, Manning and Martin shared stories that were equal parts heartbreaking and humorous. Like any profession that is also a passion, the work is made easier by the love for it, but the injustices are more painful for the same reason. Manning’s debut mystery novel, Dollar Signs, is loosely based upon one of her cases while working as an Austin attorney, and the nuances of that case are brought to life, mixed with a healthy dose of savvy storytelling.   When asked what had prompted her love of reading during her childhood, Manning gave credit to a librarian in her life. “Once I started, I just took off and read every book in the library. Books were a way for me to escape my small town and expand and travel in many ways, all while just sitting in my room.”

Martin’s fascination and respect for Korea and its culture was evident during this panel discussion as he shared how some family and friends were puzzled by his desire to stay in Korea during his time of service. As he explained to Scott Montgomery, “Culturally, I realized early on how different Korea is from the West. Not only are the buildings and the food and the clothes and the music and the art much different, but also the way people think. I was fascinated by this (and I still am).” His attraction to the culture and the time period in which he served is evident in his latest release, Ping Pong Heart, which takes us into the heart of a North-South Korea espionage mystery.

When asked what drew him to reading, Martin admitted that he hadn’t been much interested in reading when he was a child. He’d found it difficult to find stories that captured this imagination. Then along came Jack London, whom he had discovered when he was fourteen years old, and To Build a Fire converted him into a life long reader.

Martin shared with us that, while he would have loved to have spent his entire military career in Korea, the Army decided to send him back to the States to serve as a recruiter. It was during this time that he decided he would use his spare time to write. “I had wanted to write for twenty years, and at that point, I decided to give myself permission.” That decision was the catalyst that sparked a successful writing career, one that has allowed Martin to share his fascination of both Korea and time period in which he served in that country.

Billy Kring’s latest novel, Tonton, features female border patrol agent, Hunter Kincaid, throwing her into a South Florida case involving a Haitian community and vodou. When asked if some of his villains were based upon actual people he had encountered during his time working border intelligence and security, he replied, “Yes, and I haven’t even used some of the worst offenders yet.”

Are you scared yet, readers? You should be. Billy paints an effectively frightening villain within his book’s pages, and it has been recommended that this latest book is best read during the daytime. The opening scene of Tonton is based upon an actual experience of Billy’s while working border security. “Well, everything but the shark, but the shark is from another case,” he explained.

Billy explained that he truly enjoyed the work he did, which meant that he came late to the writing game. He had once had a bank job and he hated it, living each day in a cubicle and not being out in the world. He loved the fact a career in border security meant that each day brought new challenges and experiences. “I never knew what was going to happen next, and I liked that part of the job.” Like Martin and Manning, Billy then realized he could take his enthusiasm and experience for his work and bring it to a life writing fiction. Billy also shared the nuances that ripple across our borders. “There are two distinct cultures that have changed and merged over many generations, and it’s important to recognize that and bring those elements to the story.”