One thing I like about being in a book club is that I get a chance to read books that I hadn’t heard of. And since I hadn’t heard of Kristine Kathryn Rusch’s story, The Secret Lives of Cats, I’m glad that it came to my attention and I had a good excuse to read it.

Amazon describes it as: Winner of the Ellery Queen Mystery Magazine Readers Choice Award for 2008, this Anthony-nominated story was one of the most talked about stories of the year.

I can believe it. I was drawn in by its first sentence. “Homer Ziff didn’t believe in old adages, but after his long and eventful spring, he couldn’t help but think that whoever put the words “curiosity,” “cat,” and “kill” in the same sentence had to be onto something.”

I like curiosity, cats, and of course crime fiction. So I’m there! You got me. (And look at this awesome cover. I love it.)

I like the premise. Ziff wonders where his cats go during the day so he attaches a small camera to each cat’s collar. The camera takes still photos, not video. (This was written when GoPro was still new and incredibly expensive.) Every day he downloads and saves many of the photos to see where they go. He notices that they go to a place where other cats congregate and sit there. Are they looking at something? What are they doing? He’s fascinated and after several days it becomes apparent that what they are looking at are bones, human bones.

He calls the police. “When the operator answered, he said, “I think there’s a dead body in my neighborhood.” And that brought the detectives to his door.”

He has to explain to them that the cats have found a dead body, but he doesn’t know exactly where it is. And he has to do this without sounding crazy or guilty. Fortunately for him, one of the detectives understands right away.

I’ll let you read the rest of the story to find out what happens. I thought it was a full-length book so I was a little disappointed that it was a short story, only 33 pages long. I wanted more! I liked everything about it, the characters, the descriptions, and the plot. I thought it moved right along.

I highly recommend this short read and I’ll definitely be reading more by Kristine Kathryn Rusch. I was curious to see what else she has written and was thrilled to find that she also writes a lot of sci-fi. I’ll confess that I’m a bit of a Trekkie so I was tickled to see that she’s written a few ST books too! (Insert The Original Series music here. Ah, ah, ah, ah, ah, ah, ahhhh.)

So go check out The Secret Lives of Cats and the other books listed on her site. https://kriswrites.com/ 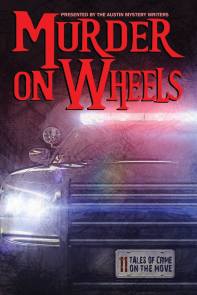