Everything I knew filled roughly 2.5 posts.

Now I write about what I don’t know about writing and leave giving advice to those who know what they’re doing.

Reverting to my old librarian persona, I also write about blogs by writers who aren’t anywhere near running out of material. Here’s a short list.

Each Friday, Rochelle Wisoff-Fields invites readers to compose 100-word stories based on a photo prompt. Writers post stories on their own blogs and then link to an inLinkz list to share with other Fictioneers and with the public. It’s fun. Specific rules are found here.

Sammi Cox posts a weekend word prompt: The rules: “Write a piece of flash fiction, a poem, a chapter for your novel…anything you like.  Or take the challenge below – there are no prizes – it’s not a competition but rather a fun writing exercise.” Participants are free to link their efforts in the comments.

TSRA introduces readers to authors, gives authors a platform, and provides information for writers aspiring to be published.

—from Uninspired Writers: “Writer’s Block? Relax! Do Something Else”

—from Jami Gold: “Tips for Creating the Right Impression of Our Characters”

—from Lucy Mitchell: “Why Some Stories Are Like Bridges to Other Stories”

—from Anne R. Allen’s Blog  . . . with Ruth Harris: “Freewrite: How to Write About Traumatic Events Without Adding More Trauma” by Marlene Cullen

TSRA also promotes—and thank goodness, considering how much writers need it—”FUN and an OASIS OF CALM and Font of useful Knowledge andTips for Indies (please do NOT feed my naughty chimps or they may follow you home) from the woes and stresses of the real world”—such as,

Kate was on a bit of a hiatus for a while but is back now with “Social Distancing for Dogs.” She’s posted a lot of dog stories—my favorites are about the dear (and sometimes smelly) Macaulay, the dog with the Neville Chamberlain mustache, including

“The Miasmatron: Or Never Feed Steak to a Dog”

“The Day the Dog Did What He Was Told” [with video]

Rummage through her blog. You’ll find many more gems on many more subjects.

Hugh posts about “this, that, and everything else,” but my favorite posts are the Blogging Tips, such as,

“7 Things To Lookout For Before Following A Blog”

and one treasure for WordPress users:

“The reading of all good books is like a conversation with the finest minds of past centuries.” ~ Rene Descartes

“We are all now connected by the Internet, like neurons in a giant brain.” ~ Stephen Hawking

“Do you know how helpless you feel if you have a full cup of coffee in your hand and you start to sneeze?” ~ Jean Kerr

I could go on—my first draft is twice as long as this one—but the deadline loomed hours ago. I hope you’ll check out some of these blogs. And I hope you enjoy them and return for more.

Image of apes and books by Gerhard G. from Pixabay

Image of cowboy reading by mosla99 from Pixabay

The current title comes from the first chapter of Mark Twain’s Huckleberry Finn. Mark Twain knew everything about writing. Ernest Hemingway said so.

I did it again: prepared my piece for November 21 well in advance, set it aside for later revision, forgot to post it.

As we in the writing trade say, AARGH.

As my fourth-grade teacher said, Better late than never, but better never late.

As I say, take what my fourth-grade teacher said, chop off the clause starting with but and read on.

Because I recently attended Writer Unboxed’s UnConference in Salem, Massachusetts, I planned to write about it this week.

UnCon comprised five full days of sessions heavy with both information and inspiration: not so much how to write, but how to dig deeper, make richer, write better.

The week was intense. I’m going to have to think about it for a while before I can write about it.

So this week, following V. P. Chandler’s lead, I’m sharing a story I wrote for Friday Fictioneers. It’s not crime fiction–or maybe it is. I’ll have to think about that, too.

“These are morels.” She added salt. “Everybody eats mushrooms.”

Mary looked at the gravy, then at John. “Maybe you should spit that out,” she said.

“‘Shrooms” first appeared on Telling the Truth, Mainly. A few words about how I came to write this story appeared April 12, 2015 on Austin Mystery Writers

Click the link for Friday Fictioneer instructions. Visit Rochelle Wisoff-Field–Addicted to Purple for this week’s photo prompt. A new prompt is posted there every Wednesday.

Kathy Waller blogs
at Telling the Truth, Mainly
and at Writing Wranglers and Warriors.

Most people don’t believe it, but I was almost thirty years old, and had been teaching English for seven years, when I discovered I possessed a writing process. I learned about it in a special summer program for teachers of English at the University of Texas – Austin–the Hill Country Writing Project. 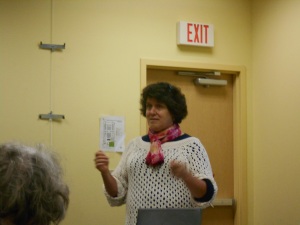 A certain writer of fiction for middle grade who spoke at the Texas Library Association’s Bluebonnet luncheon several years ago was even older than I when she found out about hers. I won’t mention her name, although I’ve just discovered she lives in Austin and am wondering whether she might accept an invitation to speak at one of my Sisters in Crime chapter’s meetings–But I digress.

This author said children she met at school visits started asking, “What is your writing process?”  When they explained to her what that was, she thought a while and then described it in roughly the following way:

Hit the alarm button, roll out of bed, throw on robe, drag out of bedroom, bang on son’s door in passing, go downstairs, make coffee, pile dirty towels in hall, bang on son’s door and yell “Get up,” dress, put towels in and start washer, go to office, turn on computer, inhale coffee fumes until eyes open, pull up file, stare at monitor, drink coffee, stare some more, check on son . . .

This author’s process isn’t exactly what the UT scholars meant but it’s worked for her through nearly sixty books (the last time I counted).

About a month ago I reviewed my own writing process–I’d been trying and failing to complete (which means I couldn’t even begin) a 100-word story for Friday Fictioneers, and I believed analyzing my process might offer insight into the source of the problem. I did my best to remember how I had written the first three short-short stories, which had practically composed themselves.

The next three paragraphs provide a rough description of what went through my mind as I wrote those stories, which were based on picture prompts. I’ve included links so you can see the pictures and also, if you wish, read the final versions of the stories.

First story: “Nothing But Gray.” Prompt: Man looking out window at courtyard? stone walls on all sides, no visible exit–b&w except for pot plants, red flowers. Boxed in, trapped, stone, gray. Start–boy, not man, place him staring out, gray stone, his POV. Easy–put him at window. Consider table, 4 plates, one boy. Guests for dinner? A brother. Mom comes in. Gray. Death. Mom in denial. 4 plates. (Note: Really, I’m not sure how I wrote this. Serendipity. Started writing and tripped over a miracle.)

That isn’t exactly what the scholars meant either–they talked about pre-writing, writing, revising, editing, polishing, nitpicking,** things that can be taught in a formal classroom setting.

I’m talking about the process unique to the individual, the brain state during which neurons explode at the mere thought of outlining before you do anything else or outlining at all, the state during which you either eat five pounds of Cadbury eggs or handcuff yourself to the birdbath so you can’t reach the box. Or, the state in which you’re relaxed, productive, focused, enjoying the act of creation despite the confusion and uncertainty creation entails.

Join me for Part 2 to discover
the Five Truths of the Writing Process,
how to make your writing practice more effective, and
What Darrell Royal and a Jack Russell Terrier Have to Do With Anything

Kathy Waller blogs at To Write Is to Write Is to Write, and once or twice a month at Writing Wranglers and Warriors. Two of her stories will appear in AMW’s MURDER ON WHEELS, available soon from Wildside Press. Years ago, Kathy’s tongue got lodged in her cheek and she’s never managed to get it unstuck, so you can’t believe everything she says. Except about the writing process.