It’s time for another installment of Who Are The Members of Austin Mystery Writers? 😉  So today I’ll interview fellow member Gale Albright. Let’s learn a little more about her. 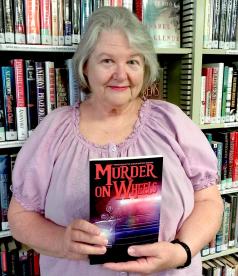 V.P. – So tell us a little about yourself. Where did you grow up? Has this influenced your writing?
GA-I was born in Tyler, Texas, in the East Texas piney woods. A lot of generations of my family are from there. I know it has affected my writing because I always have to write about Texas. I had many conversations with older people in my family when I was a little kid, so I heard a lot of stories about hard times picking cotton, taking a lunch to school in a lard bucket and going barefoot until it was time to start school in the fall. I am fascinated with the Great Depression and the WW II years, all from an East Texas point of view. I love Southern story telling, all the rhythms of language and colloquial expressions.
V.P. – What kinds of jobs have you had? Do bits of these jobs appear in your writing?
GA-When my daughter was young, I worked at a credit bureau in Chicago, then went into a training program at the Chicago Tribune to learn to typeset the news and proof galleys of type when the technology involved hot metal. Things are very different these days. I worked for the University of Texas for 23 years as a typesetter and administrative assistant for the Petroleum Extension Service, Engineering, Spanish and Portuguese, and the School of Law.
I’m thinking about incorporating newspaper reporting into an upcoming fiction project. I had one of my fictional characters attending the UT School of Law in a book I wrote several years ago. I might fish it out of the file cabinet and work on it some more.
V.P. – Do you do any other kinds of writing besides fiction?
GA-I do newspaper writing at the moment at a weekly newspaper, The Hutto News, as a writer and editor. I really like it. I worked for a number of years at newspapers, but always in proofing or typesetting. I enjoy getting a byline for writing articles now. Sometimes I even write the front-page story. I also dash off publicity blurbs for Sisters in Crime: Heart of Texas chapter in the monthly newsletter to keep members informed about upcoming programs. I did some interviews years ago for Austin magazines, such as Third Coast and Tech-Connect. The one I liked the best was about the Austin Police K-9 unit for Third Coast. I rode around with Dave Koschel and his police dog, Zeus, from Alsace-Lorraine, who obeyed commands in German. I liked hanging out in the middle of the night in a police car or a vacant lot watching the canine officers train the dogs. That may mean I’m a strange person.
V.P. – Do you have a favorite writer or movie that inspires you?
GA-My favorite mystery writer is Ross Macdonald. In my opinion he wrote great literature in the form of noir private-eye fiction. I’m also a big fan of Jeffery Deaver, who is a master of twists and double twists in plots. His characters are compelling, such as Lincoln Rhyme, a brilliant criminalist who was paralyzed in an accident and now has to solve crimes using only his mind. He also has a lot of medical problems because of his condition and his love affair with police officer Amanda Sachs is complicated because both of them are in love, but both feel unworthy of each other. Rhyme feels he would be a burden to Sachs because of his physical impairments and Sachs feels Lincoln is out of her league because of his brilliance. So the books have a scary killer on the loose, scary crimes, Lincoln and Amanda are working to solve the case, plus Lincoln has medical vulnerabilities, Sachs has psychological hang ups, and they are in love but not always happy about it. And people keep trying to kill them. I love all the weaving in of these plot twists and turns.
V.P. -Do you have any hobbies besides writing?
GA-I’ve always been a little vague on what hobbies are. Do I knit and sew? No. Do I make miniature Civil War soldiers? No.  I’ve always been an avid reader, but I don’t consider it a hobby, more like a necessity. I love to organize writing workshops, if that counts as a hobby. I like to attend writing workshops. I’m just a workshop junkie.

Thank you, Gale, for letting me interview you. I enjoy telling the world how interesting our members are!