Well. Today I planned to get out of bed and be perfect. It didn’t work that way.

First I had a fight getting a certain video to embed properly in a certain site. It was a very nice video, and I was trying to help a friend, but the video began with an ad about a cure for toenail fungus, complete with pictures. That was not what I had in mind, and it was certainly not what my friend had in mind. The fight took longer than it should have. I’m afraid to look back to see if the cure–for the video, not the toenail fungus–is still working.

Then while I fought, my breakfast, thanks to a kind husband, sat on the table beside the recliner where I was working, and I looked up and saw Ernest the Cat had designs on it. Yesterday I found him stretching upward, his paw in my bacon. He’s never tasted bacon, but he’d like to. I rescued breakfast. 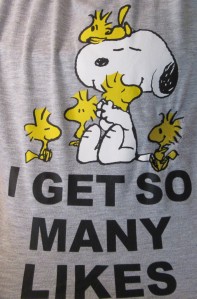 So now I’m sitting here in my Snoopy and Woodstock nightshirt, entirely inappropriate attire for a woman of my age and respectability, recovering from a major fume.

I knew I should have put on makeup as soon as I got out of bed. Yesterday I did so for the first time in ages–let’s face it, staying home for seventeen months straight changes one’s attitude toward personal grooming–and with makeup, the day went better.

I used a face cream, which I thought might be a night cream but didn’t have my glasses on and so couldn’t tell but risked it anyway.  And it did wonders for the wrinkles around my eyes, filled them right in.

I put on enough blush that a ship on troubled seas would need no lighthouse to warn it away from perilous rocks, so I wiped some of it off. I used eye shadow, maybe too much, but I didn’t wipe that off because behind my glasses it’s invisible anyway. I applied lipstick.

Then I used my curling iron. That’s problematic because something is wrong with my shoulders–no rotator cuff tears, but the arms don’t like to go up as far as they should, like to the top of my head, and I refuse to go back to PT and have a bunch of skinny infants tell me I’m doing the exercises wrong, when all I’m doing is executing them faster than prescribed because I want to get them over with and go home.

But anyway, I made the effort and used the curling iron, and then I even brushed my hair, and the day really did go better. I imagine my husband was relieved. He’s staying in self-imposed quarantine, too, and there’s not much visual variety inside. I’m probably the reason he spends so much time looking at the cats.

Anyway, I spent the next part of my better yesterday deciding that I spend too much time watching television. That wasn’t a difficult decision, since I’ve watched all the BritBox offerings at least three times. I like to watch TV shows and movies more than once; the more often I watch, the less attention I have to pay to know what’s going on. But it seemed time to unsubscribe. After all, I still have Prime and ROKU.

I also decided I wasn’t listening to enough music–I used to have music going all the time–so I upgraded Spotify in hopes it will play what I tell it to, like it used to, instead of what it wants to. I went all the way up to 99 cents a month. I’m not sure 99 cents is enough to do what I expected. I want Max Morath playing piano rags–he has the best touch I’ve ever heard. And Brian Stokes Mitchell, whose name I can rarely remember without prompting, singing a certain song from South Pacific, which I’m afraid is not in the repertoire.

But there’s an out. If I’m not happy, I can always go back to Acorn TV, which I subscribed to years ago. I watch mostly British programs. The accents are comforting.

Anyway, having progressed from cussing a certain website to discussing television, I’ll move into the main idea of this post, which my high school English teacher said I should do in the first paragraph, but I’m old enough to break the rules.

The main idea is TV shows I like–old TV shows. I’m always reading the backlist, so why shouldn’t I do the same for viewing?

Here they are, in no particular order:

All of these mystery/thriller/police procedurals, and many others, are available on Prime as well as on BritBox and other subscription services.

Now I shall divest myself of my Snoopy shirt, don some regular clothes–also known as rags, but these days, only one human and two cats see them, and they don’t care–and apply makeup. Maybe I’ll wear enough blush to be a lighthouse. With the amount of rain we’ve been having, I might end up being useful.

Photographs of actors are television screenshots taken by me.
Photograph of Snoopy and Woodstock was taken my my husband.

Kathy Waller blogs at Telling the Truth, Mainly. Her stories are published in anthologies and online. Sometimes she works on a novel. Sometimes she doesn’t. She wants to re-read an old book by Rebecca West, but she can’t remember the title.